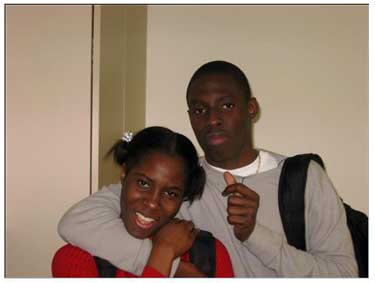 The Hyppolites Bridge the Gap Between Haiti and Darien.

A Foot in Two Worlds

There are two new students at Darien High School who you may have noticed them walking around the hallways. Many kids are intrigued by their arrival because everyone seemed to have heard that they were coming from Haiti. There is a huge cultural gap between Haiti and Darien, and that’s what is most intriguing to many teens in this New England town.

Haiti is the poorest country in the Western Hemisphere while Darien is in one of the wealthiest counties in the country, therein lies the gap. There is Olsen Hyppolite, a 16-year-old junior, and Stephie Hyppolite, a 15-year-old freshman. Olsen is a charismatic Haitian teenager. Listening to him speak about his family made him a very interesting person to talk to. Most of it is still a mystery. In an interview, Olsen he told me that he had not lived with his father until very recently, that his father was in fact living in Darien while Olsen, his mother and his sister were living in Delmas, Haiti. Finally after many years of waiting Olsen’s father brought them over from Haiti. Olsen had only seen his father as a little boy when he spoke for the interview he said, “I saw him when I was little and then I saw him again and I was very tall.”

Olsen once said, “Here I do not have to worry about getting home, there is no fear.” The idea of the fear of living is something very far from minds of Darien students, so this teenager who knew what it was like makes him incredibly different from everybody else at Darien High School. When the interview was granted, many new things were learned about Olsen. He went to private school in Haiti and most of his peers where white, so he does not find that aspect of Darien that different. However, Olsen said the main difference between Darien and Haiti was that, “my math class here has nine people in it, there, there were 35.” He also remarks that the girls here are very open and that he likes to hang around with all kinds of different people, and that people here are very social. When asked what he disliked most about Darien he simply said, “It’s a lot colder here, in Haiti it’s always warm.” Olsen had a funny response when asked what he liked about his new home: “I don’t know, it hasn’t been warm yet.”

When Olsen was asked if he had anything else he wanted to say for the article he started to tell me about how here he feels stereotyped because of his skin color. People expect him to be a certain way, to have a stud earring, to play basketball, to be poor, or that he is violent and mean because of his skin color. He wants people to know that the color of his skin has nothing to do with who he is as a person, and he is very nice and he doesn’t want to be stereotyped. He just wants to be treated equally.

When his sister, Stephie, was asked if she could make a comment about Darien she said, “People’s clothes, in Haiti we would never be allowed to wear the kind of clothes they wear here.” As Mrs. Charlene Riordan said, “there is a huge cultural gap between Haiti and here.”

Olsen’s and Stephie’s entry into the high school has not been an easy one. They came in the middle of the first semester, barely able to speak English. They were put into the ESL program, but still they struggled because ESL is not a one-on-one program, it is a class in which most of the course is in English.

Mrs. Riordan, one of the French teachers came up with a solution. Olsen and Stephie began tutoring sessions with a veteran French teacher three times a week, for two hours, Mondays, Wednesdays, and Fridays. Their tutor is Mrs. Bolognani, a French teacher with 30 years of experience. Since the addition of a tutor, Olsen and Stephie have been able to improve dramatically, and today you can hear them around the hallways speaking in English with their new friends: a significant step for the Hyppolites siblings to help them begin to bridge the gap between their past in Haiti and their new life in Darien.