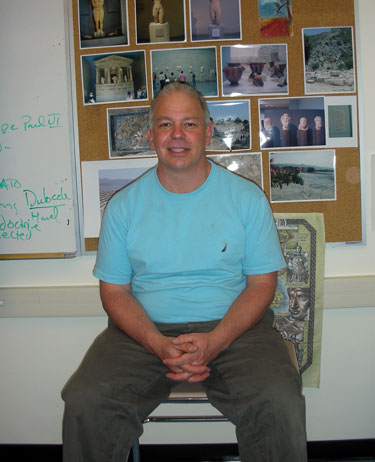 "Mr. Balazs sitting in his A-208 history classroom."

Breaking Away From Law

You may have seen him walking through the halls before the first bell rings, sporting black biking shorts and sneakers with a briefcase in hand. At first glance you may think it’s odd a biker is roaming the Darien High School halls. After taking a closer look you may realize he’s not just a random biker off the streets: he’s your history teacher. I decided to sit down with this biking enthusiast history teacher to see if there were any other interesting facts I could discover about our very own Mr. Stephen Balazs.

Some students may have had the privilege of being in Mr. Balazs’s history classes as a freshman or senior. "Mr. Balazs is a great teacher with a good sense of style, especially sweaters," freshmen fan Meredith Persico said. Yet for those other students, like myself, who weren’t so lucky to be taught by this man there is a lot to be learned.

First there’s his name "Balazs," which is not a typical last name unless you are from Hungary. Mr. Balazs is in fact 100% Hungarian and his parents are Holocaust survivors. In keeping with his Hungarian heritage, Mr Balazs’ son is named Laszlo, a typical Hungarian moniker.

Mr Balazs has attended many schools such as McGill University in Montreal, Canada and University of Texas in Austin before going on to study law at the University of San Diego. He then went on to get his masters degree in international affairs at Columbia University.

After college, Mr Balazs became a successful lawyer in New York where he stayed for 14 years before coming to Fairfield County to teach. He spent one year teaching at New Canaan High, before realizing Darien was obviously superior, and he’s been teaching here for eight years.

So why did he decided to make the switch from law to teaching? Mr. Balazs said he likes how with teaching, “every day is different and unique…and his job is constantly invigorating and fun.” In addition to this aspect of the job, he enjoys the flexible schedule of being a teacher, which allows him to peruse his love for travel during school vacations and the summer months. Balazs has traveled to many countries over the years and among his favorites are Provence, France, Turkey and Cape Town, South Africa.

When he’s not traveling the globe, Mr. Balazs likes to cook. He enjoys cooking so much that he even considered opening up his own restaurant after leaving his job as a lawyer. According to fellow history teacher Mr. William Devlin, his scallops are “really good.” Balazs enjoys cooking just about anything as well as playing his guitar, proving Mr. Balazs may be similar to many teenage boys here at DHS. So, next time you see him walking through the halls (either in bike shorts or normal clothes) maybe you could strike up a conversation about guitar or cooking if you and Mr. Balazs share the same interesting hobbies.

For more on Mr Balazs' biking career - be sure to check out the May print edition of Neirad.