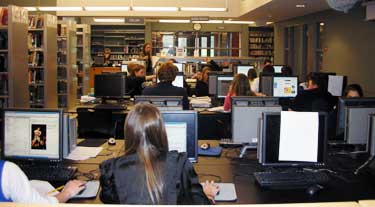 W hen was the last time you called a friend to hang out and your friend turned you down saying, “Sorry, I can’t, I’m in the middle of a good book”? Probably never, because these days, teenagers spend less time reading, thus caring less about the used-to-be-sacred book.

Howard Gardner, in the Washington Post article “Books are not the Only Measure of Literacy”, describes the declining interest in reading. “Computers…are destroying literacy. The signs—students’ declining reading scores, the drop in leisure reading to just minutes a week, the fact that half the adult population reads no books in a year—are all pointing to the day when a literate American culture becomes a distant memory.”

Neirad Enilno has set out to investigate whether this is in fact true at Darien High School. Sophomore William Plunkett says that he never reads for fun, but when he does, he sits down with a book for no more than six minutes. “I’m too busy [to read],” he says, although he doesn’t seem too heartbroken about his lack of reading time.

Gardner explains that reading for such a short time is becoming the norm among teenagers. “Periods of lonely silence or privacy seem toxic,” Gardner said. Worrying about the fate of one’s social life isn’t the only reason for a low attention span towards books. “I read for however long I can, but I usually don’t have too much time,” says sophomore Lina Starovoitova.

Another sophomore, Suneil Raghvan, has placed reading on a higher priority in his life. “I read once a day…usually for an hour” he tells Neirad Enilno, going on to explain how sometimes he even rereads books, something Plunkett avoids entirely. “I never reread books,” Plunkett says, laughing at the absurdity of the statement. “What’s the point; I already know what happens.”

DHS English teacher Ms. Lynda Sorensen notices the difference between the amount of time kids devote to reading now versus in the past, and attributes the decline to the growth of sports and activities that take up a lot of time. “If [reading] wasn’t a requirement [for school], I suspect it might not be a part of students’ lives,” Ms Sorensen said.

However, Ms. Sorensen says there is more of a “public invitation to read” now that libraries are a more prominent part of society. She also mentions Oprah’s Book Club, which is a segment of “Oprah’s” talk show that encourages viewers to read books the mega-gabfest host has selected.

Another possible reason for the decline of books is the increasing amount of time kids spend on the Internet. Sophomore Julie Lee says most of the reading she does is reading wall posts and messages on Facebook.

“There’s a dizzying set of literacies available—written languages, graphic displays and notations,” Gardner said. This poses the question: could the pages of books be replaced by typed words on a computer, iPod, or phone?

Sophomore Emily Evans rejects this idea. “I hate reading things online. It hurts your eyes,” she says, pointing out the negative consequences. Besides, would you really want to read an entire book on a computer?

“You lose the feeling of holding a book,” Ms. Sorensen says. However, she recognizes the possible benefits of going digital: With less paper books, we would save a lot more trees.

Ultimately, the decision is up to you. If books start being released digitally, would you choose to buy them from iTunes or Barnes & Noble? Either way, the future of reading is looking bleak unless we devote more time to this ancient educational pastime.