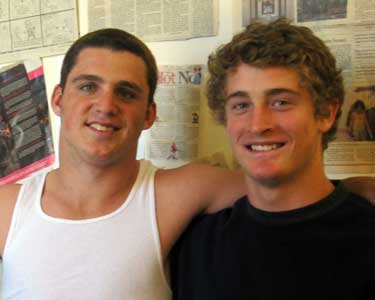 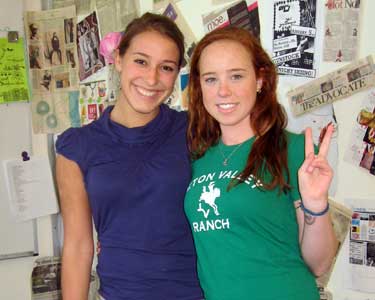 The Modern-Day Namesake Stories of Peace, Love, Joy and Flowers

Four students have evocative last names linked by a good vibe: Jameson Love, Kelley Peace, Kevin Joy and Kelsey Flowers. Peace, Love, Joy and Flowers conjure up warm feelings of a peaceful love-in with abundant joy and flowers. Some might think their parents came of age in the 1960s except these psychedelic surnames were not concocted by former flower children; these are legit modern-day seniors’ names in the DHS class of 2008.

Jameson’s Irish last name suits him well. He agrees that all you need is love: “I’d say I’m a pretty loveable guy,” he said. “I’m always happy, joyous; I don’t hate anybody.”

People have teased Jameson about his distinctive last name on occasion, saying things such as, “Jameson Loves _____.” (you fill in the blank) J.Lo is another nickname he does not particularly enjoy. “I hate it! My coach calls me that. People do it to make fun of me.” Even so, Jameson claims he loves his name because it is defining, rare, and nobody else has it. (Jameson's name is not his only intriguing quality)

More notable people with the name Love include Kevin Love, a basketball player, as well as actresses Courtney Love and Jennifer Love Hewitt. “Their names are probably not real. They just wanted to be as cool as me,” Jameson jokes.

Kevin Joy was not quite as effusive about his jubilant moniker - and he is not sure about the ethnic origin of his name. Kevin said some of the nicknames people have made for him include “Joy-Boy” and “Joyous Jilly.” When asked if he had ever been teased for his last name, Kevin half-joked, “Yes. Then I beat the crap out of that person.” Though he has been taunted, Kevin explained how he still likes his last name because it “keeps [him] happy.”

Besides the obvious relationship of their last names, Peace, Love, and Joy share a funny story. Jameson, Kevin, and 2006 DHS graduate J.T. Peace, brother of Kelley, were all on the same hockey team two years ago. For fun, their coach set up the line with the three of them because of their last names. “You know, we’re advocates of peace, love, and joy…which is why we play hockey,” Jameson joked of the situation.

Kelsey Flowers is also not sure about the origin of her name. Kelsey, who has never met another person with her last name, is a little bit luckier on the teasing front: people have not really given her an uncomfortable nickname. The only one she can recall people referring to her is “Flower Power” years ago. And that is not really an insult for this powerful varsity athlete. “Being a girl, my last name is fitting and not really a good one to make fun of. But as a guy, I think it would have been harder to deal with. Like, I know my brother was teased,” Kelsey says. One cannot talk to Miss Flowers without trotting out the obvious question: the lily is her favorite flower.

Being a girl, Kelsey would not be able to pass down her family name when she gets married. But don’t think she is necessarily giving up this pretty namesake. “I really don’t want to change it when I get married. I love my last name,” Kelsey said. Kelley Peace agrees. She says she will most likely keep her last name, “depending on whether she gets married or not. I don't know what I would do,” Kelley said.

Kelley said her Irish surname has yielded the nickname, "KPeace." Senior Briana Cagninelli describes Kelley and how she relates to her name. “She’s kind of like a hippy, a free spirit. She even sometimes wears clothes with peace signs,” Briana said. "People almost seem to gravitate towards me because of my last name," Kelley added. Kelley also shared one aspect of her name she particularly likes - signing her signature.

These names are filled with good karma - a positive sign for these four seniors as they get ready to embark on the next chapter in their lives hopefully filled with much peace, joy, love and flowers.