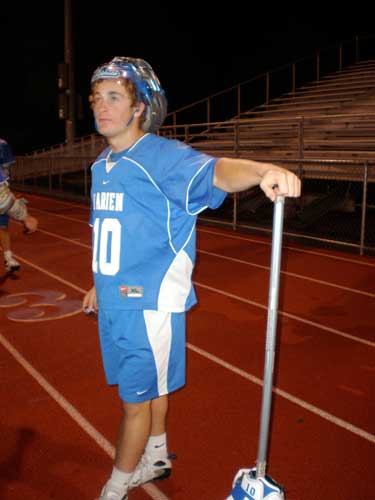 “Jameson has been and is now the emotional leader of our team,”

For senior Jameson Love, athletics has always been part of his life. From growing up in Stamford playing baseball to playing varsity hockey and finally becoming the starting captain goalie for the Darien Lacrosse team, athletics has always been something that defined him but has never been the only thing that makes him who he is. But at the moment - sports is pretty high on his list: “My goal for this year is to go 23-0,” Jameson said.

Jameson moved to Darien from Stamford at a young age and as soon as he made the move lacrosse became part of his life. Jameson played throughout his time at Middlesex and when he entered Darien High School in 2004 as a freshman Jameson immediately was placed on the varsity lacrosse team. “The seniors were pretty scary at first and they were pretty hard on us” Jameson said of that great chapter in recent DHS lacrosse history.

That 2005 season the team went 23-0 with arguably one of the best starting lineups in DHS school history. Some of the stars included Cooper MacDonnell who was named an All-American and now plays for Loyola College in Maryland and Kyle Hollingsworth who currently plays on the Brown University Lacrosse Team. Even though Jameson rarely saw any playing time that year on a team crowded with superstars, the leadership the senior class brought helped him become the lacrosse player he is today.

“Jameson has been and is now the emotional leader of our team,” Head DHS Lacrosse Coach Jeff Brameier said. “Even as a junior he was by far the one that ‘drove the bus’!”

Jameson brings those same enthusiastic expectations to the field for the 2008 season. “We hope to win the state championship and also win the FCIAC by beating Greenwich who has almost their whole starting lineup returning,” Jameson said. He has always looked at lacrosse in a type of leader position that he expresses with his confidence in his teammates who mutually return his respect.

“Jameson is a very enthusiastic leader, and definitely one of the loudest voices on the team,” senior teammate Brendan Ross said. “Besides being a vocal leader, he is always making people laugh with his crazy antics.”

When talking about why he chose the goalie position and if he is ever at times worried about getting injured Jameson responded by stating, “I put my body on the line for the team because I know my teammates do the same.” Also commenting about this year’s lacrosse team Jameson said,” this year we are expecting a lot from our underclass men and if they play well we will play well.” He also went on to say that with a large number of starting juniors this year the team will have a good balance between the junior and senior class.

Jameson brings this competitive and leading attitude everywhere with him no matter the situation. Jameson’s longtime girlfriend senior Caroline Frelinghuysen spoke about this aspect of Jameson. “I admire the enthusiasm and energy that he brings to all aspects of his life. Jay is an inspiring role model for his peers on an off the field,” Caroline said.

His attitude also helps Jameson excel in the classroom with high grades and a great amount of respect from his teachers.

The lacrosse skills and leadership that Jameson has displayed over his four years at DHS will now take him to Bryant University in Rhode Island next year where he will be coached by former Duke University Lacrosse coach Mike Pressler. With the departure of Jameson from Darien High School, the lacrosse team will lose one of the best goaltenders in state history and the school will lose one of its best leaders.

Think Jameson has a cool last name then click here!