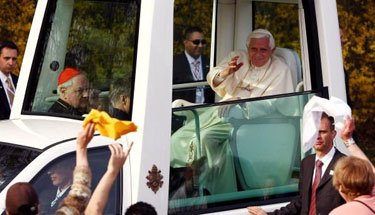 "As the Popemobile approached the crowd, the thousands assembled there to see him grew more and more excited."

As a young Catholic, I jumped at the opportunity to attend the papal youth rally during the pope’s six-day visit to the United States this month. I wasn't sure what to expect from Pope Benedict XVI's meeting with youth and seminarians in Westchester County, New York on April 19. I had heard that his apostolic journey was merely a recruiting opportunity for new vocations. I had also heard the Pontiff was an extremely harsh, conservative German man, often nicknamed "God's Rottweiler."

The event was held on the lawn of St. Joseph's Seminary in Yonkers. Buses had to park at Yonkers Raceway and then attendees shuttled to the rally site. Once my church youth group arrived, we had to go through a security system to rival any post-9/11 airport. Tickets and ID had to be checked twice, all bags had to be searched, and everyone had to walk through a metal detector. No food or beverages were allowed and no large bags or backpacks were permitted. While going through security I thought to myself, why are all these precautions being taken for one man? What about this man is so important? Not being a hardcore Catholic like many others who attended the rally, I didn't realize how important the pope was until he arrived.

My group was settled in our spot on the lawn by around 10 a.m., but the pope didn't arrive until around 5 p.m. that evening. The day was spent lounging on the grass listening to the entertainment provided. It was even nicknamed "Popestock" for its similarities to the 1969 hippie concert Woodstock.

The concert was hosted by comedian Mo Rocca and included several Christian groups I had never heard of such as Salvador, Third Day, Three Graces and TobyMac. However, there was one concert participant that everyone knew ─ myself included ─ Kelly Clarkson. Each performer did an amazing job and I found myself having a good time even if I didn't know many of the bands and the songs they were singing.

During the concert, everyone had the opportunity to get up and visit the food vendors. At the beginning of the day we were all given a complimentary meal, desert, and drink ticket. In order to cash in your tickets and get your food, you had to stand in one line for an hour, get your tray, and then go stand in another line and get your food. While the system may have worked for a smaller crowd, it didn't work for the 25,000 people at the rally, leaving many hungry and in need of water.

The highlight of the day was when Benedict XVI finally arrived. The entire crowd was jumping up and down waving gold and white cloths, the colors of the Vatican. For a crowd who had spent the day lounging in the sun, this sudden change of energy was astounding. I found myself being swept up into it all and jumping and hollering with a crowd of people from the Bronx seated next to us. First the pope went inside the seminary to greet 50 disabled children who had been selected prior to the event. After saying a healing prayer to each one of them, he delivered a short speech and then came outside to greet the rest of us via the “Popemobile,” the pope’s private vehicle.

As the Popemobile approached the crowd, the thousands assembled there to see the Pontiff grew more and more excited - an unexpected level of fervor for teenagers to have when they spot an 81-year-old man. When he finally came into view, everyone went completely crazy, myself included. The pope was the cutest old man I had ever seen. He was always smiling and when he spoke he had a German accent similar to that of Augustus Gloop from Charlie and the Chocolate Factory. Surprisingly, no group was rowdier than the seminarians: even the nuns and monks were cheering and waving their cloths.

When the pope began to speak I suddenly understood the importance of this man. He talked about how with all the obstacles youth face today; we must always look toward truth. “But what is truth?” he asked. When his holiness said that truth is Jesus Christ, there was the loudest cheer I have ever heard in my entire life.

After Benedict XVI left in his Popemobile, the real struggle of the day began. Whoever planned the exit strategy clearly did not realize how many people it was going to effect. It was as if all 25,000 of us were being herded like cattle. It took my group almost two hours to get from the seminary to the bus, something that had only taken about 20 minutes earlier in the day. After being pushed and shoved all the way back to the bus, I settled in and began to reflect on my day. Even though there had been many annoying aspects to the rally, I realized that what I had experienced was something that would stay with me for the rest of my life and I was grateful to have had the chance to see a man who gives so many Catholics hope.