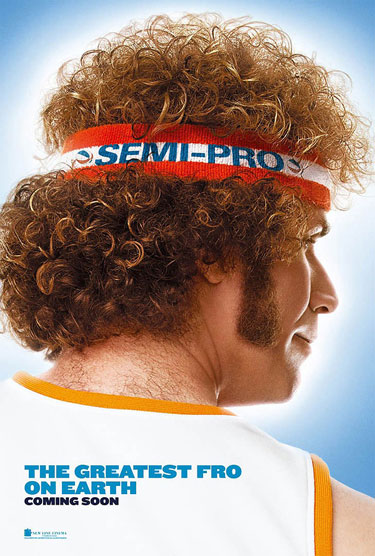 Will Ferrell and his fro in "Semi-Pro."

Oh Will Ferrell! Where have you gone wrong? Who never taught you that after reading a script, you don’t have to produce the script? I thought “Kicking And Screaming” would have knocked some sense into you. Why did you have to produce “Semi-Pro”? Just look at the name “Semi-Pro!” Does that sound like a hit?

Of course, perhaps I am overreacting. I would be lying if I said that I laughed at no points during the 85-minute running time. Will Ferrell’s innate genius seems to be that he can salvage even the worst and most rundown plotline with brilliant physical comedic timing. So in that regard, perhaps “Semi-Pro” achieved its goal as a comedy film. Actually, let me rephrase the previous sentence: So in that regard, perhaps “Semi-Pro” semi-achieved it’s goal as a comedy film.

There honestly isn’t much depth to the plotline of “Semi-Pro”. Essentially, Jackie Moon (Will Ferrell) is given the task of managing the Flint Tropics American Basketball Association (ABA) team so that it can survive the upcoming merger with the NBA. If the team doesn’t maintain a top record and bring in the fans, the team will be dissolved and Moon’s career will end. To accomplish his goals, Moon goes to crazy, not to mention funny, measures to draw in the crowds. Or something to that effect.

The issue with the plot is that we’ve seen it manifested a hundred times before, does not evoke any emotional response from the viewer, and is not very interesting. Besides that it’s great. While I understand that this movie is a comedy and as thus does not “need” a substantial plot, when compared to other Ferrell films like “Anchorman: The Legend of Ron Burgundy” or even “Elf,” the plot truly pales in comparison.

But then again, and stop me if I’m wrong, most people don’t see Will Ferrell movies for their deep plots; they spend good money to watch Will Ferrell exploit his body and wrestle bears. Fortunately, both of those things happen in “Semi-Pro”. The movie is good for a few laughs but all and all; there really isn’t much new material to work with here. We’ve already seen the 1970s jokes in “Anchorman” and the sports parodies in “Tallaedega Nights” and “Blades of Glory”. The jokes just feel like they have been done before.

And what’s with the animals in every Will Ferrell film? He always seems to find himself either wrestling or getting mauled by some beast in nearly every movie. I suppose it was pretty funny the first times we every saw it, but now it’s starting to get repetitive. Maybe that’s the moral behind Will Ferrell’s recent film performances. Save a few exceptions such as “Stranger Than Fiction,” his films seem to have degraded to a set type of movie with easily interchangeable plots and characters but the same effect nonetheless.

So in the end, I’m not sure whether “Semi-Pro” is a film that truly deserves its ticket fee. On one hand, there is the undeniable the cheap laugh associated with the film but is it really worth it? I think that until Will Ferrell starts to diversify both his performances and his films, we will only continue to see a gradual decline in both.