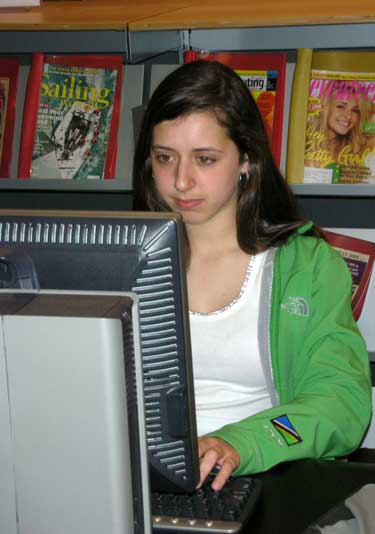 Courtney works on her Livejournal 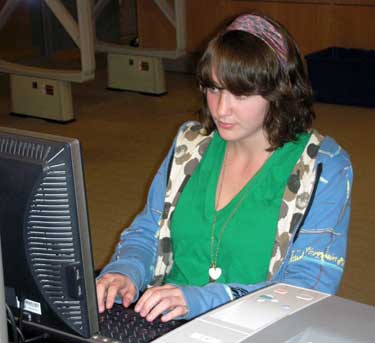 There’s a good chance you’ve come across a blog surfing the Internet. But what exactly is a blog? Where did they all come from? The word is an abridgment of the term “web log.” Blogs are becoming more and more popular on the web. Serving as an “online-diary,” a blog is a collection of personal commentary written by the creator.

I searched around Darien High School only to find there were more “bloggers” than I expected. The blogging opportunities are endless; Livejournal, Xanga, and Blogspot.com are just some of the most popular hosts. And who knew Facebook created an application geared specifically towards bloggers?

There are those who use their blogs simply as a scrapbook of online expression, while others are interested in getting their name, and work recognized. Just ask DHS junior Dan Egan, who says, “My original blog was anonymous, but I may make another where I put some of my original writing, because I'm an aspiring writer.” Dan’s blog is only available to select readers who have been personally vetted by him.

DHS senior Courtney Finkel also restricts her readers. And she is an old pro on the blogging scene. “I started writing on Xanga in 7th grade, then switched to Livejournal two years later…it's a cool way to get to know people online in a safe, non-creepy way…back in the day I used my blog as a journal where I wrote about anything that was happening in my life at the time. It transitioned into an outlet for venting and I would only write about bigger events that other people could relate to.”

Here is a sample of Courtney’s blogging prose: “It's undeniably summer. It's so great. This is the first time that Memorial Day weekend has felt so much like the real kick-off of my favorite season. 90 degrees and climbing today. Pressing humidity, brightly colored tank tops, blinded by the bleachers, that sort of thing. Priceless. This week has been sort of a joke academically, but every teacher seems to be in favor of it. Probably thanks to the weather. Finals? Ha. (I realize this is not the year to be laughing, but I'll jump that hurdle when I get there.) As for after graduation, teaching wittle childwens to sail this summer (typical) will be an adventure. Not worth worrying about it yet, but for once I'm actually looking forward to trips to 101 and regattas and the whole Courtney's life in the summer thing that pretty much never gets old. Sorry, seriously, the sun is getting to me. It's still May. It's still May. It's still May.

Similar writing strategy for another DHS junior, Mackenzie Cockerill, who says, “I just started writing the odd, random things that pop into my head about stuff that happened to me during the day or profound things that I think about… a record of my thoughts, really, but people tell me that they enjoy reading them.”

Here is a sample of Mackenzie’s random wisdom from her blog: “Dear Florian, Creepy Man Who Tried To Pick Me Up On the Amtrak Train,I hope you didn’t get too offend¬ed by the recorded message on the rejection hotline whose number I gave you instead of mine. Don’t ever tell me that I can touch your leg if I want to. I don’t want to. I don’t want to. You’re 32, I’m 16, you’re a creep, I have a boyfriend, and you’re Norwegian. It would never work out between us. For future reference: when you’re on a train and a girl sits next to you: don’t talk to her. She doesn’t want you to. She also doesn’t want to have your phone number acciden¬tally dropped into her lap when you “drop” your bookmark. Sincerely, Girl Who Told You That Her Name Was Petra Nemcova.”

Mackenzie’s Facebook column caught the eye of Neirad Co-Editor in Chief Nick Phillips who asked her to start writing for Neirad. Her column has received such positive response Mackenzie was asked to continue writing a monthly column called, “The Random Life.” Mackenzie’s latest column will appear in the print edition of Neirad later this month.

A blog is a great way to communicate with friends, ask for advice, express opinions, or just vent. You have the choice to stay anonymous and blog for fun, or expose your work for the whole world to read. A blog can be anything the author wants it to be. As Courtney Finkel puts it, “My Livejournal is my territory; I just let people read it.”