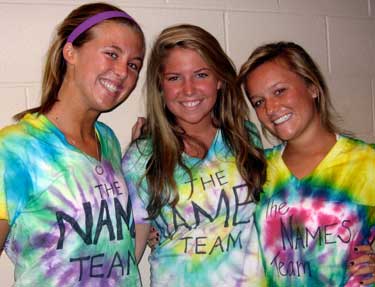 Darien High School held its first Names Can Really Hurt Us Day this month. The powerhouse program was brought to DHS to energize the students to help create a kinder high school community.

"Being a part of the Names team was an incredible experience,” junior Kelly Large said. “I think it made everyone who got to attend more conscious of their actions towards others." Large was one of the student organizers of the event.

Names Can Really Hurt Us is a program run by the A World of Difference Institute, an educational branch of the Anti-Defamation League. The assembly preparation involved nearly 100 school members, including faculty, staff, and students from all four grades. Forty-one student facilitators, 34 faculty, and eight panelists participated in two three-hour training sessions, and another dozen students were involved in the closing ceremony performances.

“The enthusiasm and the follow-through from students have been really impressive,” said assembly co-coordinator Mrs. Mary Mammana, who worked along with her colleague, English teacher Mrs. Melanie Agnew and Assistant Principal Mr. Doug Rubin to bring the Names program to DHS this spring. “We were also excited that the program’s training sessions brought together a real range of students, along with staff and faculty from all different departments,” Mrs. Mammana said.

Names Day has taken the place of DIVE day. In the past, DIVE day was an hour-long event where students would get together and do a workshop about accepting people for who they are, and not stereotyping. But the impact that that day had on the student body was minimal, and often students would leave with little or nothing from the groups. But if one thing is true of this year’s Names Day, it had everyone, not just the sophomore and juniors talking.

“I think that everyone that was involved in the assembly did a really good job, people appreciated hearing their stories, and it just made the whole experience seem more real.” junior Lusine Badalian said.

Students walked into the assembly on Wednesday, April 9th, expecting to be talked to for a couple of hours by one person about accepting each other, but what they got was so much more. The students were told right from the start of the assembly to keep an open mind about everything said during the time they spent in the auditorium and what they ended up hearing were personal stories from the student panel on racism and stereotypes. It seemed as though for every student listening in the audience, there was a person on the panel that they could relate to.

When the panel was done telling their opinions and stories, the students had a chance to go up and speak to their classmates during the ‘open mic’ time. Two microphones were set up where any student could come down to share a personal story, or to thank a panelist for bringing up a subject. Many students expected the lines to be filled with about five outspoken students, but as the people came up to speak, the lines got longer and longer with people wanting to apologize to a friend or group, thank a good Samaritan, telling a story, or giving their opinion on racism or stereotyping. The lines actually had to be cut off because of time, which surprised many.

“The open mic was heartwarming and comforting because it was a great and safe way for everyone to express themselves,” sophomore Tasha Valentin said.

The students then broke off into groups to share their feelings on the assembly and do some activities, much like DIVE day. The groups were said to not have been as effective as the first assembly, but many students were happy to share opinions and listen to their peer’s thoughts on what they had just heard or participated.

After the groups, the students went back into the auditorium to watch Irish step dancing, listen to poetry, and hear DHS student band TONE play songs. But unlike DIVE day, students kept on thinking and talking about the assembly. They focused on how they appreciated all the speakers and their stories. And you may still hear someone in the halls or at lunch say, “Hey, don’t you remember Names day? Don’t say that!”