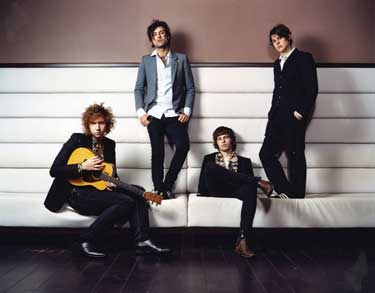 " The Kooks have many soft, sweet, meaningful lyrics."

The Kooks "Shine On" With Konk

“Oh you can have it all and wrap it in the world/ You can have everything/ You can have love and lots of other things/ To make you think." With these words, British indie-rock band, The Kooks' new album Konk kicks off.

Konk was released on April 15. The new album was named after the studio in London where it was recorded. The Kooks take practice in using namesakes; their name came from a 1971 David Bowie song. Konk is their second album, following the triple platinum Inside In/Inside Out in 2006. Konk is following in Inside In/Inside Out's success having already hit #1 on the U.K. albums chart.

The Kooks formed in 2003 at The Brighton Institute of Modern Music in Brighton, UK. Despite a speech impediment developed as a child, lead vocalist Luke Pritchard has successfully led the band with his meaningful vocals and backup guitar. Bassist Max Rafferty, the second to join the band, left The Kooks at the beginning of this year, after Konk had been completed. Luckily for the band and its fans, The Kooks will power on with replacement Dan Logan. Hugh Harris and Paul Garred complete the quartet on lead guitar and drums, respectively.

The first track, "See the Sun" slowly starts off the album with the guitar only in the background, then steadily progresses into an upbeat song. Having no true chorus shows the song is original and doesn't fit a pattern; however this doesn't hold true through the rest of the album. "See the Sun" ends upbeat and catchy with two lines repeated four times to engrain the lyrics into the listener's memory. "See the Sun” launches Konk off on a good start; it captures the listener's attention and brings carries them into the next song, The Kooks' single "Always Where I Need to Be".

"Always Where I Need to Be" begins instrumentally much like other songs on the album, this only lasts a few seconds until Pritchard steals the limelight. The words are integral to the beat in this song, but the vocals are good and filled with emotion like they are throughout the album. The song is enjoyable until the lyrics take a turn for the worse. In many songs, "lalala" or "ooooo" works with the instruments and carries along the song, but in the case of this song, Pritchard singing "doodoodoo" sounds quite annoying.

The fourth song of Konk, "Do You Wanna", is memorable enough to have been stuck in my head for a day, but not interesting enough to be considered one of the better songs on Konk. Five seconds into the song, I immediately got a music déjà vu. Harris's opening guitar lick sounds exactly like U2's The Edge's lick in "Vertigo". The verses are good, but although the chorus does sound good it's too repetitive to be enjoyable. After the album's first guitar solo that lasted more than five seconds (this one lasted 15) and more repetition, I became bored with still a minute left to go. The song redeemed itself, however, with a good fadeout with voice and guitar.

The last quarter of the album is filled with slower songs. "Tick of Time" stands out from the rest of this album with its unique arrangement. The song starts out with guitar, and then a soft voice comes in, then laughing, some inaudible speech, and coughing. When the song returns a few seconds later, Pritchard's voice returns but is accompanied by Harris's voice as they sing together for the remainder of the song. There's a raw feeling to the tune, as if the band is jamming on crates in a barn instead of in the Konk recording studio. As in "Always Where I Need to Be", the words are very to the beat, but the beat in "Tick of Time" is also made by what sounds like maracas. This is a fresh sound after "One Last Time," a primarily vocal song only accompanied by a simple soft guitar.

After about 40 minutes of listening to Konk the album seems to be over, as no more sound is emitted from the speakers. If you've been exposed to enough music, you'll know not to be fooled by this stillness as there is a bonus track after a minute of silence called, "All Over Town." The tone to this song is fitting; its last song status on the album isn't the only aspect which makes it seem like a farewell song. The emotion in Pritchard's voice and the instruments in the background are slow and bittersweet. If sung by a typical teenage girl, this song would be about the hidden hurt of a victim of a jealous, egotistical gossipmonger. However, The Kooks' "All Over Town" goes deeper with soulful lyrics "What do you see when you see me, sir?/ The very same thing that makes you bitter". The best part of this song is the guitar. Although The Kooks never make an instrument other than voice too significant, Harris proves that he is more than qualified to take center stage.

A main flaw of the album is repetition. Many of the songs on the album have the same sound and there is an excess of lyrical sameness within each song. In “Love It All” the words “love it all” are repeated 24 times without a break, losing the listener’s apt attention. If there was no repetition throughout the album, its length would probably be halved.

The Kooks have many soft, sweet, meaningful lyrics. Although the vocals make the words sound separated, the flowing lyrics of “Sway” add emotion to the song. However, other songs have pop-like unoriginal lyrics. In “Shine On”, Pritchard brightly sings, “Won’t you shine, shine on ‘cause you’re not done” a few times during the chorus. It feels odd to have a song that feels like happiness and sunshine amidst songs about hurt and longing.

Overall, listening to Konk was a great use of my time, and the second time I listened to it was even better. If their songs were only on as background, the listener wouldn't really notice the repetition, just the honest emotional sounds of each Kook song. The only major complaint I have is that all the fast, upbeat songs are in the first half of the album and all the soft, slow are at the end. It would have been a better listening experience if different types of songs were interspersed. Besides that, Konk is a great album that definitely earns a spot on my List of Indie CDs I Want to Own.