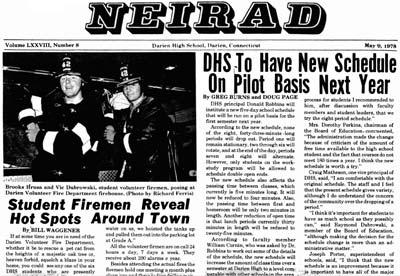 As May finally rolls in, students are flooded with thoughts about prom, AP tests, and summer plans. But what were students thinking about in May 31 years ago? The Neirad issue from May 9, 1978 highlights student volunteer firemen (DHS still has them), new schedule changes for the next school year (they're different from our schedule today), too much socializing in the library (still an issue), senior pranks (what will it be this year?), and more. Live in the past with the May 1978 Neirad, and read one of the articles below.

This year the library staff is attempting to control more fully the noise pollution in the library. The effort was instigated by Donald Robbins, DHS principal, who felt that the library had become too much a place for socializing.

Two of the people most involved in the enforcement of a quiet atmosphere in the library, librarian Phyllis Flandreau and secretary Ann Burkhardt, operate under set rules in determining whether or not a student deserves to be "kicked out" of the library.

The first rule applies to the carrels behind the book racks. These are for quiet study, with no whispering or talkign allowed. This rule has been the most frequently obeyed this year and the area is a quiet place to study.

The second rule deals with the remaining carrels, with stickers on them stating, "Carrels are for individual study. An occasional quiet aside [soft whispering] is fine but visit or study together somewhere else." In hopefully what is not a measure of student opinion, the few remaining stickers that have not been tom off by students either have several words crossed out, have obscenities on them, or are partially torn.

The third rule is that whispering or soft talking is allowed at the tables, but the noise should not go beyond the range of the table.

"Since there are no restrictions on where the students go in their free time," commented George Emerson, head of the library, "students are most likely to come in here because the library is the most appealing place to be and it's where they will meet their friends. The cafeteria is too wild and undisciplined for many students towant to study or socialize there. Consequently they choose the library, which is more attractive and controlled."

Often when a student is asked to leave the library, he feels picked on and that he has not done anything that is wrong. For this reason, the librarians frequently find students talking back and openly disputing a request to leave.

"There's a great freedom today for developing potential," said Mrs. Flandreau, "which I think is great. Kids stand up for what they think is right, but sometimes they are rude. I find that when I talk to people individually, they seem to be more understanding."

The librarians are still faced with a basic problem, namely, that talking to a bare minimum is acceptable, but where must the line be drawn?