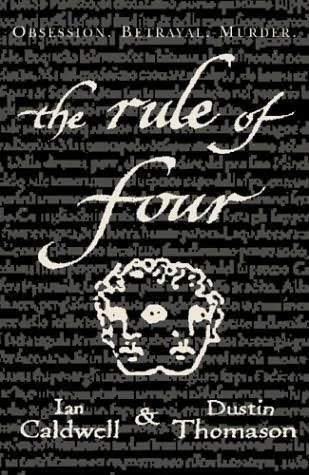 Something to Pass the Time

The rule of Four Book Review

Tired of doing fun things? Annoyed at how the gym teachers will not raise the basketball hoops during frees?  Or perhaps, you feel like you want the new Lil’ Wayne rock album.  Well there is a cure for all of this uncertainty, and that solution would be "The Rule of Four" by Ian Caldwell and Dustin Thomason.  These two warriors of literature went to Princeton and Harvard respectively.  Princeton University also happens to be the subject of this very action-packed fiction novel.  The novel has everything a teenager needs in a book: murder, laser tag, Renaissance mysteries, and drunken naked people.

"The rule of Four" is centered on an ancient manuscript called the Hypnerotomachia, a script so confusing and impossible to understand, that every scholar who challenges it goes insane, or gets brutally murdered via dorm window.

An Italian author wrote the Hypnerotomachia during the Renaissance.  The book is a world of forgotten erudition, strange sexual appetites, and terrible violence, sort of like our beloved Darien High School.

The four main characters of the book are all senior guys with different stories as to how they arrived at the New Jersey ivy.  They are at the end of their college career finishing up thesis papers.  As the novel progresses the four friends get closer and closer to breaking the code of the Hypnerotomachia.  The novel also shows the struggle of competing professors to solve this ancient text.

What draws me to this book is more than the sex, violence, and nakedness but also the way it is written.  The book starts off slow and moves in out of the present and past, spanning from the Renaissance to the main character Tom Sullivan living his life at Princeton.  “As we walked east toward Ivy, then, our new friend told us stories of his own pranks in high school: dying the pool red for Valentine’s Day; releasing cockroaches in English class when the freshmen were reading Kafka; scandalizing the drama department by inflating a giant penis above the theater roof on opening night of “Titus Andronicus.”

"The Rule of Four" is written modestly and with a love for Princeton.  The university frat life is explored and traditions are explained.  Reading this book makes me feel like I’m accomplished and good at life because the authors bring the reader right into Princeton, which is not a bad way to spend some time when a gym teacher won’t raise the hoops during a free.