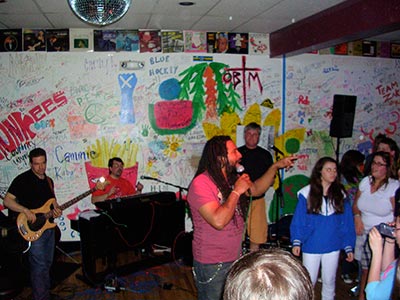 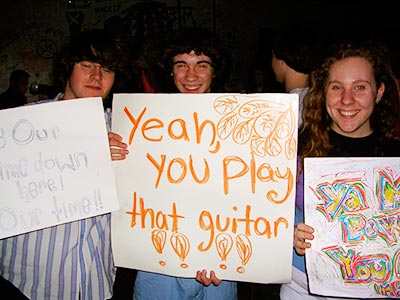 Darien High School band Staff Infection made its live debut at The Depot. Made up exclusively of Darien High School staff members, the band played for a solid hour to a crowd made up of both students and faculty members last month. Although seeing teachers out of school was awkward at first, students soon let loose and allowed the music to take over as they danced through the night.

The band, made up of custodian Rodney Brown, English teacher Matt Pavia, choral teacher Christopher Andrade, Middlesex Middle School music teacher Dylan Spielvogel, special education teacher Kai Underwood, and special education aide Charly Fish had been practicing since September after hearing rumors of a staff battle of the bands. When it became apparent that such an event would not be happening, the group agreed they did not want their months of hard work to go to waste and decided to play a benefit for The Depot. It was Underwood who first came up the band name. Art teacher Katie Stuart said, “Their name is disgusting…but I love it.”

Tone opened the night playing a solid set that featured both cover songs and original songs. Although this DHS student band was short a few members, juniors Nick Trautmann and Kenny Weiss were joined by fill-in drummer and Class of 2008 grad Willie Bruno who managed to get the crowd amped for the main act. Tone ended its energetic set with the Fountains of Wayne 2003 hit “Stacy’s Mom” to much audience acclaim.

Staff Infection took the stage next and rocked out for a solid hour. The set was electrifying, with each member getting to solo at least once in the set. The real highlight of the night was when the band slowed things down for a beautiful rendition of Bob Marley’s “No Woman, No Cry.” The faculty musicians added a new spin to the original by adding a cello and organ. The result was breathtaking and by the end of the song, the entire crowd was singing along waving their cell phones like lighters. Junior Jack Bosha said, “I love them all and I’m a little disturbed at how aroused I am.”

After the show, guitarist Matt Pavia said, “I hadn’t played in a band since college. It’s really a dream come true to be a 28-year-old spending his Friday night in a teen center.” Singer Rodney Brown said, “I think the night went really well and the band sounded great even though we made a few mistakes.” Now that they have established themselves as part of the growing Darien music scene, the future may bring Staff Infection original songs. “We’ll see if we want to write original songs. We’re just glad that this gig went so well,” Mr. Pavia said.