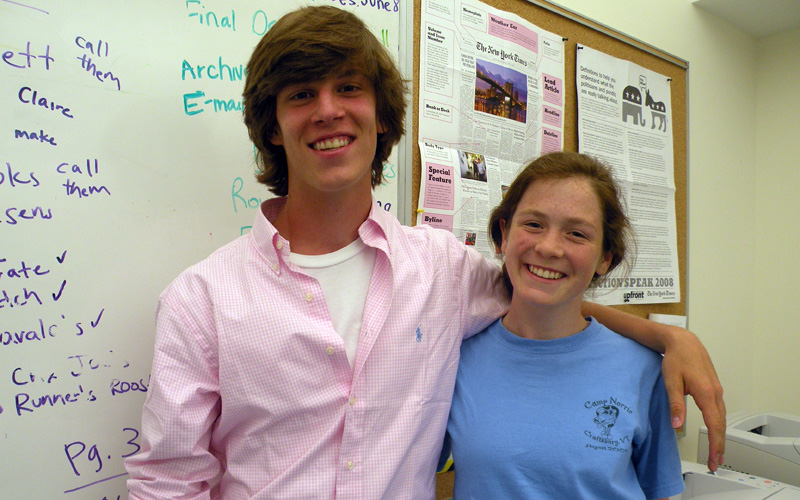 Parker Lange is the Editor-in-Chief of Neirad. This is his second year acting as an editor. Last year as a junior, he and fellow editor Katie Grozier brought Neirad Enilno to award-winning status. Parker has been involved in the journalism program since his sophomore year, and to put it simply, has a way with words. (see “We Don’t Want to See Your Face on Facebook” on page 2) He has been known as the Mark Twain of his generation by those who have read his work. Parker looks forward to working with Sports Editors Jay Alter and Ian Sullivan, and hopes to bring Neirad print to award-winning status as well.

Katie Grozier is the print editor for the 2010-2011 school year. Prior to her new role at the helm of Neirad print, Katie helped lead Neirad Enilno award-winning glory. Neirad Enlino won both the Silver Crown Award from the Columbia Scholastic Press Association and a first place award from New England Scholastic Press Association. Katie was recruited during her sophomore in 2008 and has always had a love for journalism. Katie’s first piece for Neirad took a look at the students' trip to Qingdao for the China Exchange Program (See page 9) to another piece that took a look at where to find the best pizza in town. As a senior this year, Katie is excited to push print to win more awards like online! 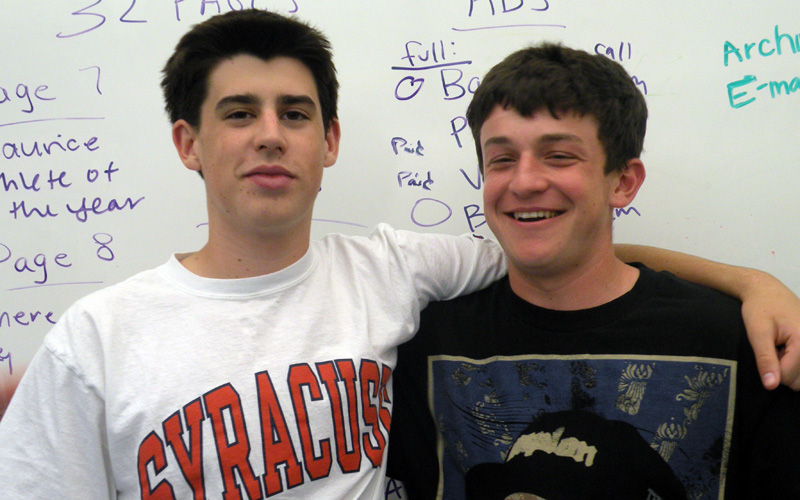 Jay Alter has been a member of Neirad since freshman year when he completed the Triple Crown or "trifecta" landing three stories in the May ’09 print issue.  Jay will be the Sports Editor, alongside Ian Sullivan and can't wait to get started. Jay also is the sports anchor for Blue Wave News, a member of YAT, and helps out with challenger baseball.

Ian Sullivan is the sports editor for all the Neirad platforms: print, online and sports blog. Ian got his start in editing when he took over the Blue Wave Sports Blog editorship last spring. He is joined by junior Jay Alter in overseeing the many sports that comprise life at DHS both on and off campus. He is on the varsity baseball and basketball teams. When not cheering for the Wave and Rex Sox, Ian explores his musical side. He loves to rap Big L and sing Whitney Houston.  He also plays the guitar. Ian sees his challenge to keep up the great legacy of Class of ’10 sports editors Meg Murphy and Jack Bushell. 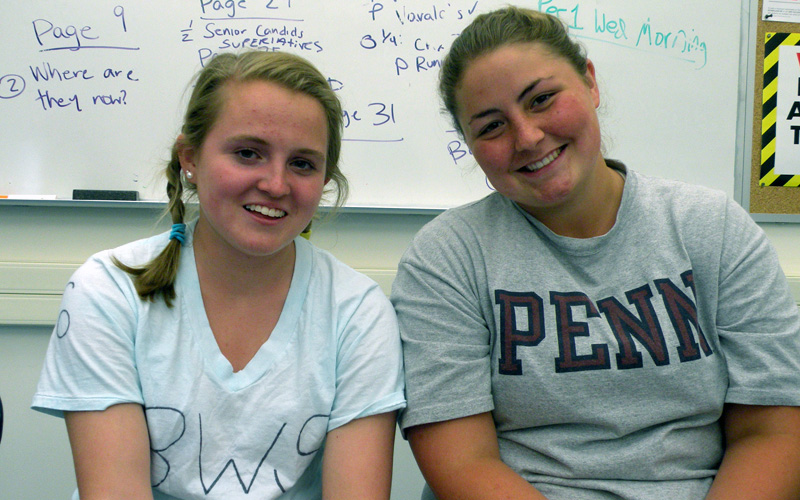 Sarah Graves is a Design Editor for Neirad print. Sarah was recruited after her freshmen English teacher Emily Heiden told the Neirad team they had to sign this top talent. Sarah success continued her sophomore year with her pieces on everything from submitting video college essays  to a review of Brendan’s 101..Sarah is excited to plumb the depths of Adobe CS3 Indesign to create more visually-stunning pages.

This is the second year that Claire Dickson has been an editor for the Neirad team, as she was design editor last year. She plans to uphold Neirad's stunning reputation, while adding even more new aspects to the paper. She will contribute to all areas of the paper this year, including, Neirad Enilno. Claire is excited to be an important part of Neirad for the 2010-2011 school year, and is excited to keep the paper running smoothly through her senior year. She started her journalism career in Introduction to Journalism with Stacey Wilkins in the fall of 2008 , and has been interested in design and writing for the paper ever since. Claire has written articles such as the  Signs article and her photo story on the Critellis' cool Crib 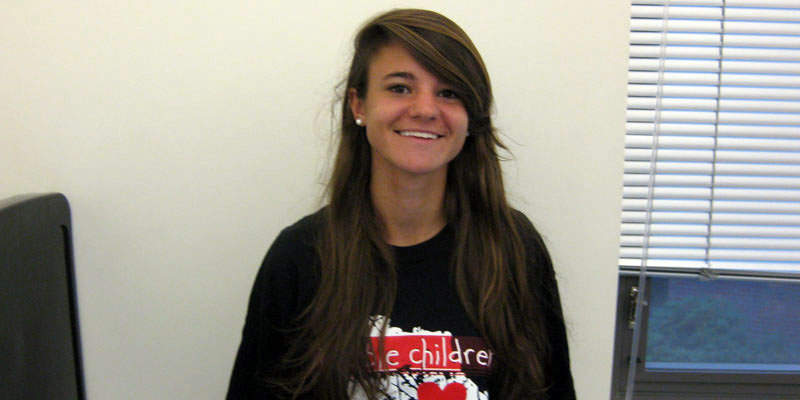 As Senior Copy Editor, Lisa Randall will spend her fourth year on the Neirad staff editing articles and writing hard news stories. Some of Lisa’s previous stories include the affordable housing fight (see page 1) in Darien and the school budget crisis.: these articles reflect her love for the investigative aspect of journalism. Lisa will also play a key part in training underclassmen on reporting and writing for Neirad’s print and online platforms.  Lisa hopes to pursue a career in English, communications/journalism, or publishing.

Kevin Cassidy is the Business Manager of Neirad. Kevin is in his second year in the post and his third year in Neirad. Kevin managed to keep the ad pages full last year despite tight times. Kevin enjoys writing as a break from crunching the financial numbers. His piece, "License to Thrill” was featured in the September back-to-school issue. Kevin also worked with Editor-in-Chief Parker Lange to expose the dangers of bus overcrowding. (see page 5). Kevin is known for leading a campaign to land Justin Bieber as the Class 2011 commencement speaker. Kevin is the founder and president of the Connecticut chapter of Bieber Fever and has been to 35 Bieber concerts. 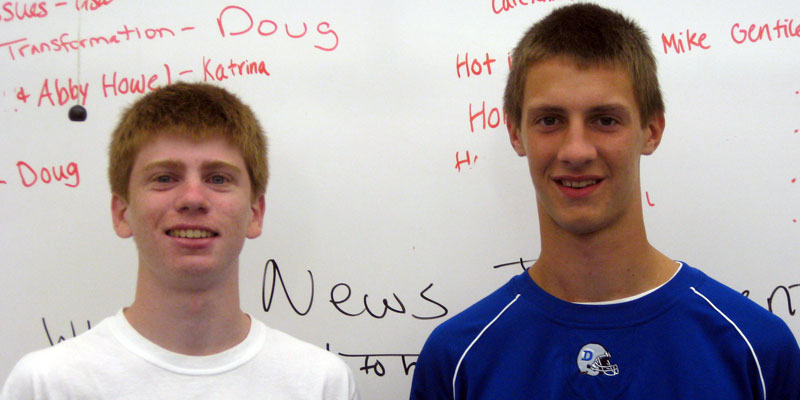 Junior Ryan Barthold will take the position of one of the online editors for the 2010-11 school year. This is Ryan's second year in Neirad, and first year in an editor position. Ryan took Intro to Journalsim his freshman year, and was hooked. Ryan's responsibilities include editing online articles for Neirad Enilno, and, well that's about it.

Matt Pik will be an online editor for Neirad Enilno this year. This is his first year on the job, as he took the first two courses in journalism his sophomore year. He soon learned the ways of setting up the website, and knows the responsibility it is every month to do so. Matt instantly was hooked on journalism, first writing side-stories, moving up to featured articles, and finally learning the skills it takes to become an editor of this great student newspaper. When outside of the Neirad headquarters, Matt has a love for all things sports, as he secretly hopes to become the general manager of the New York Yankees. For now, however, he is content with what the future holds for him as an editor for Neirad Enilno.